The University of York wanted to develop an easy to use system for allowing postgraduates to work towards their individual goals.

Postgraduate students at the University of York were using long paper forms to keep record of their goals and the training that they planned to undertake in order to progress their skills. The problem with the existing paper forms was that keeping these records up to date and relevant proved difficult and required constant management. As a result, the RETT team at the University of York reached out to SkillsForge to collaborate on a tailored product that would work for institution's specific skills framework.

I met with the RETT team who had already sketched out some ideas for the feature. Upon meeting the team, it became clear that the needs of the users was to be able to have individual pathways allowing people to complete their goals, suited to their own needs and goals. The feature would have to be interactive and make it clear to users which steps they should take next to achieve their goals. Finally, stakeholders in the SkillsForge team explained that the new training plan feature must work within the context of the current product, being an additional visual representation that should be usable by new and existing customers.

Following the first meeting, I went away and sketched out three separate designs, prototyping these in Figma and providing a document with the reasoning for these designs and how they would meet the needs of their users. The RETT team were happy with the design and delivering the functionality in an iterative manner. The team decided that the skills framework and training would be delivered as a tube map design - allowing individuals to choose the goals that mattered to them, which would generate a tube map with their end goal as the destination and a series of 'stops' along the way, which would be recommended training sessions.

I spent some time working through the legacy code that helps to build the SkillsForge skills product, documenting my learning as I went. This code was developed over time and had no formal documentation, which was one aspect of this work that I wanted to improve. I got the functionality working by iterating through the development. First, I got the code generating a single tube map once a user had ranked their skills, following that I had it working so that the tube map would update and reorder itself after a user had updated their rankings. Finally, I applied the styling for the design with CSS. The styling proved difficult at first, I was unsure how best to layout the designs to get the desired tube map design. I began by using a series of flex boxes overlaying each other, before understanding that the CSS Grid was a much better solution. I was able to implement a grid with named areas to hold as many tube stops as needed. I passed over my code for a code review by a senior developer who provided feedback about the variables I was using and tidying up some of the logging statements that I had used while testing. I was able to quickly resolve these recommendations and hand over to the RETT team for testing. 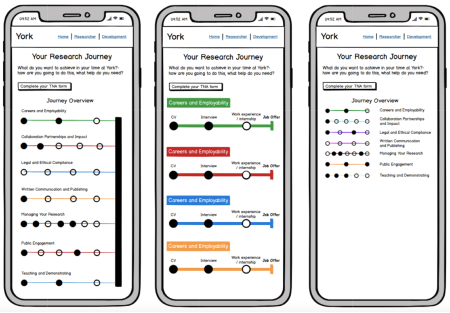 The RETT team provided some feedback regarding wording and display of recommended actions which we were able to implement into the designs. Following this, we conducted a workshop with a variety of users for which we provided a series of scenarios to allow them to test the new functionality. These scenarios included:

We received overwhelmingly positive feedback from the session with users recording their thoughts on paper and rating the ease of use, design and usefulness of the functionality. The main piece of feedback that we received from this session was that postgraduate students wanted a different method of ranking their skills which they were use and had utilised during their studies. 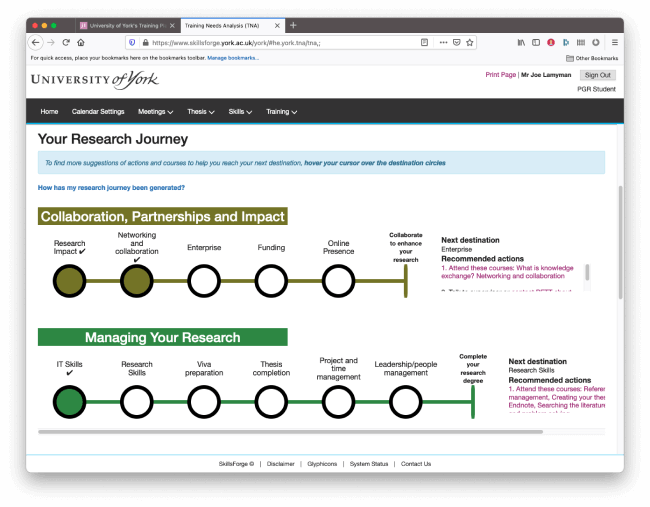 The final design that we created is a useful addition that enables individuals to develop a clear training plan that will help them to focus on working towards and achieving their goals and not maintaining large amounts of paperwork.

The tube map design is straight forward to understand and provides people with a linear path towards achieving their design in a way that is easy to evidence to academic institutions or future employers.

The system works within existing legacy code to provide the SkillsForge system with another way of representing a user's strengths and skills. The skillset is fully customisable, allowing a developer to provide a JSON object of any skill framework to then provide users with their individual tube map. Since developing this method for visualising the training plan, SkillsForge developers have adopted the design for other aspects of the SkillsForge product, such as the supervisor register - which shows supervisors their training needs and learning that they must complete in order to continue their supervisor activities.